After hundreds upon hundreds of miles of driving across vast open spaces and through urban congestion, we finally crossed the Mississippi River on the Desoto Bridge (I-40) at West Memphis and entered the Blues City. The river looked brown and muddy, but the sky was blue and bright, and the day filled with promise of seeing the Mother Lode of Kitsch.

Memphis looked to have several interesting tourist sites, amongst them the pyramid on Mud Island, the Memphis Belle, Beale Street, Sun Studios, and the old city trolleys. We were, however, on a mission, and only one brief stop in advance could keep us from our appointed destination.

The Grim Reaper and I exited at N. 2d Street and followed it south for just a few blocks, coming to the Kooky Canuck Burger Emporium at the righthand corner of N. 2d and Union Avenue. We easily parked in front of the Kook – there wasn’t much foot or auto traffic despite being a weekday downtown – as what we really wanted was just across the street.

The present-day iteration of the Peabody Hotel was built in 1925 after its namesake, opened just after the Civil War, had burned to the ground 18 months earlier. The famous Italian Renaissance edifice is known to generations of southerners and Memphians alike, and is listed on the National Register of Historic Places; sadly, it filed for bankruptcy in 1965. The building went through several subsequent corporate owners (e.g., Sheraton Hotels International) and a $25M renovation. Back in business, it now serves as a cornerstone and catalyst for downtown Memphis’ revival (the cartoonish Canuck across the street notwithstanding).

As elegant as are the accommodations, and as famous as have been some of its visitors (e.g., Tommy Dorsey, the Andrews Sisters, several U.S. Presidents), the Peabody is inarguably best known for its famous marching ducks. Although some claim the tradition of keeping mallards in the lobby fountain dates to the 1870s, it is more likely a residual of Frank Shutt’s hobby. Shutt, you see, was the general manager in the early 1930s, and an avid duck hunter. Every day that he wasn’t working, he was hunting. Some of his friends thought it would be funny to put a few of Shutt’s favorite quarry in the fountain to make his time at work seem less like, well, work. This was at the height of the Great Depression, and as the guests staying in the hotel at the time thought it was amusing to see ducks swimming in the fountain, Shutt perceived that what had started as a joke might actually be a good marketing ploy. A bellman was appointed to be Duckmaster, and he trained the ducks to waddle each morning from the elevators to their water-filled marble home on the main floor, and then back again each evening (their permanent quarters being up on the roof).

To this day, as they walk along the red carpet, Sousa’s King Cotton March is played overhead to the delight of bystanders.

Here’s a brief video that shows the daily ritual.

Much as celebrities are given the key to a grateful city, those famous who come through town are often anointed as Duckmaster for the Day; honorees have included Paula Deen, Joan Collins, Molly Ringwald, Kevin Bacon, Peter Frampton, Emeril Lagasse, the late Patrick Swayze, Oprah Winfrey, and Queen Noor of Jordan.

Watching the ducks is actually a bit of an anticlimax; I’d be more impressed if the ducks called for the elevator while still on the roof and pushed the ‘L’ button themselves, instead of being herded by an employee. But since it’s cultural history, it was fun to see once. Scratch another item off the bucket list.

I headed back to the car, checked on Boney, still covered in the back seat, and drove down state route 51, the name of which soon changes. In less than nine miles, we entered the Whitehaven district and what looks like any other non-descript commercial avenue in America. Until, to the left, we came upon 3764 Elvis Presley Boulevard. 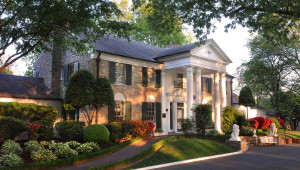 Like a shining city on a hill, Graceland is a remnant of the time when the area was largely rural, the auto dealers and check-cashing businesses having then yet to arrive. In the spring of 1957, Elvis was completing his second Hollywood movie, Loving You, and his first movie soundtrack album. He had two studio albums and 48 singles already under his belt and two years of nearly nonstop live appearances behind him. The hardworking son of Gladys and Vernon Presley was already his family’s primary breadwinner by then, and looking, at the tender age of 22, to purchase them a new home. With a $1,000 cash deposit against a sale price of $102,500, Elvis agreed to purchase Graceland on 19 March 1957. Officially, Graceland was where Elvis, his parents and his grandmother Minnie Mae lived, but unofficially, it was also the home/ hotel/ clubhouse for the entire ‘Memphis Mafia,’ the ever-changing cast of childhood friends and sycophants who surrounded and often drew salaries from Elvis.

Today, Graceland – open to the public since 1982 and, like the Peabody Hotel, on the National Register of Historic Places – is preserved exactly as Elvis left it. It is the second-most visited residence in America, behind only 1600 Pennsylvania Avenue, and sometimes tied with the Biltmore Estate.

My calcified friend and I arrived and parked in the lot for visitors across the street. Covering the Bonemeister with my jacket once again, I went inside the visitors’ center to purchase a ticket. The lady behind the desk asked if I were military or law enforcement. I flashed my (very handy) DPS badge and got a 20% discount. I boarded the shuttle, and soon the pre-recorded tour guide was providing information as the vehicle lurched across the street and up a gentle hill to the front door.

Graceland is a large lovely structure, but not one so massive or ostentatious that it wouldn’t fit in many high-income residential gated communities today. What sets it apart is not the building itself – tan limestone, white columned portico with circular drive, twenty three rooms including eight bedrooms, commanding a gentle elevation – but the size of the lot, at almost 14 acres. Originally part of a working farm, the land was owned in the 1920s by S.C. Toof, a wealthy Memphian businessman. When he died, his daughter Grace inherited the mostly undeveloped fields which her father had named after her. Before long, she gifted the land to her niece, Ruth Moore, and it was Moore and her husband who in 1940 built the present Colonial Revival manse.

After he purchased the then-seventeen year old structure, Elvis undertook renovations to suit his somewhat quirky tastes. The wrought iron gate at the front, shaped like a book of sheet music with notes worked into the design, is now as famous as is the property itself. The impressively 1970s-tacky Jungle Room is now world-famous. Still other improvements – the Meditation Garden out back where Elvis and members of his immediate family are now buried – are less immediately recognizable to all but obsessed devotees.

Walking through the house, I was struck immediately by the size of the rooms. They’re not big. The house’s floor plan may have a large footprint, but the corridors are narrow and the rooms cramped, in keeping with the age of its original construction. And while the interior of the abode has been slammed by critics – called alternately “fit for a brothel,” “nothing worth a dime,” “gaudy and garish,” and my fav, “tacky cast-off white trash haute couture” – I found it fascinating as a time capsule from an era in which shag carpeting, stained-glass peacocks, and floor-to-ceiling mirrors were still considered by some to be the height of fashion and opulent living.

The second floor of the residence is off-limits to tourists, though it should be noted that the bathroom in which Elvis expired is located directly overhead as one stands in the front entranceway.

After traversing the kitchen, the basement, and the Jungle Room, one exits to the backyard and passes Elvis’ shooting range (a converted smokehouse), the horse stable and grazing field, the pool, and the racquetball court, the latter which contains the so-called trophy room (constructed to house Elvis’ awards, memorabilia, and now a number of his sequined and gold lame suits and Priscilla’s wedding dress).

For those who are not Elvis’d-out by this point, taking the shuttle back across the street will allow them to see the King’s car collection (including his pink Cadillac) and both of his private jets, the Lisa Marie (a Convair 880) and the Hound Dog II (a Lockheed JetStar).

Not bad for a poor kid from the wrong side of the tracks who earned a ‘C’ and was told he had “no aptitude for singing” by his 9th grade teacher at Memphis’ Humes High School.

Still, visiting Ground Zero of American Pop Culture, as interesting as it is, left me with my own blues: sadness for premature loss, sadness for talent cut short, and most of all, sadness at how the American Dream can morph into a grotesque and garish parody of success, with all of the toadies and faux-friends that sudden wealth and fame always seem to generate.

Back at the car, Creaky was still covered up in the back seat, no worse for the wear. We had to hit the road, as there was still a long drive – the final leg of the trip – yet ahead of us.