The Bonester and I settled in for a long drive across Texas after escaping the Adobe Inn. The terrain, esp in the far western panhandle, is very reminiscent of Spielberg’s 1971 movie ‘Duel’ – brown, dry, dusty, with the occasional building, wind farm, or oil derrick, and mostly flat but with hills in the distance. Highway mileage signs that read in the ‘400’s. A few vultures feasting on ubiquitous roadkill. A couple of really long BNSF freight trains on the horizon with their soulful whistles. And miles and miles of nothingness. I found the solitude relaxing, but there was little to pass the time except to be alone with one’s thoughts. Even the few radio stations that could be located were in Spanish (though spinning the dial I did briefly find Wall of Voodoo’s 1982 ‘Mexican Radio’ in English just before reaching the wide-spot of Junction, TX).

Despite my love of back roads and unscripted stops, we were trying to drive as fast as possible to make it to College Station, where my son attends university. Once we arrived, he and I had a nice visit – I left my back-seat specimen in the car, however – and I even learned a good recipe for college student chili while there. Afterward, bidding my son farewell, the dead hombre and I turned north and headed toward the Big D and our next destination.

Although I was just 15 months old in November 1963, I was raised hearing about the assassination in Dallas and the myriad conspiracy theories which subsequently grew like kudzu. The centerpiece of these tales was Dealey Plaza, and none of my generation or older can fail to immediately recognize that name and its historical significance instantly.

Dealey Plaza – a National Historic Landmark only since 1993 – was a west-end feature even before the events of November 1963. The area bounded by Main St, Elm St, and Commerce St was named in honor of Dallas publisher George Dealey prior to WWII. It contains monuments to prominent Dallas residents that have long since been overshadowed by the tragedy with which it is otherwise eternally associated.

Visitors to Dealey Plaza today will see a panorama that has (intentionally) changed little in the past half century. Trees are larger and a few new signs are in place. But the buildings that ring the plaza, the triple underpass, the railroad bridge, and the grassy knoll look as they do in period photographs. Even the streetlights are circa 1963.

And then there is the Texas School Book Depository, 411 Elm St, at Elm’s intersection with Houston St, facing the plaza.

Just a stone’s throw from the grassy knoll, what we know as the depository started its existence in 1903 as the HQ of the Texas division of the Southern Rock Island Plow Company. After going through several more owners, the building became the schoolbook warehouse in the early 1960s. Fatefully, in the autumn of the year, the employees of the depository found an oil leak on the upper floors; immediately prior to the Presidential visit, work had begun to fix the leak and protect the boxes of books, meaning that there was much disarray on the sixth floor and many stacks of boxes in places where they weren’t normally kept.

It was this disarray that allowed Lee Harvey Oswald to secrete himself near a window, hidden from view, and fire no fewer than two, and possibly three, bullets into the Presidential motorcade as it slowed to turn just below his perch.

The building was slated for demolition at one point, but cooler heads prevailed, and it too still looks as it did on that fateful day 51 years ago. The top two floors are now open to visitors – the Sixth Floor Museum it is called – and over 6,000,000 have availed themselves of the opportunity since it opened in February 1989.

Leaving my articulated companion in the trunk once again, I parked, paid, and took the elevator to the top. The exhibits document the life, times, death, and legacy of President Kennedy. The museum – run privately by the Dallas County Historical Foundation which rents the space from the city government – contains photos, audiotapes, films, artifacts, and interpretive displays – arguably the most poignant of which is the President’s original place setting for the lunch at the Trade Mart which he never reached.

Even more than the displays, though, it’s the old warehouse itself – with brick walls, a rickety old service elevator, and exposed wooden beams – that sets the tone. One cannot help but wonder how a plebeian structure played such a pivotal role in world history.

There are still stacked boxes. There is the sniper’s nest. And there is the unchanged view. 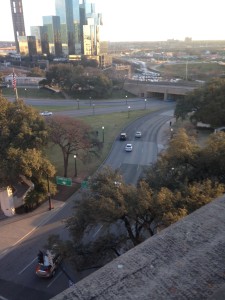 Chilling to this day, as cars still busily traverse the fatal spot marked on the pavement below.

Back in our own car, Santa Muerte and I headed northeast out of town. We had to make good time, as we were fast approaching Mecca.