There’s a story, perhaps apocryphal, that the great showman P.T. Barnum, in order to keep crowds flowing through his well-attended carnival exhibits, put large signs with arrows on the walls that read, “THIS WAY TO THE EGRESS!” The masses, ignorant of that word, surged forward to see the Egress! And soon they found themselves on the far side of the turnstiles, keeping the flow moving just as Barnum had wished.

The point? People can start to act like lemmings with the strategic application of ads and signs. Anyone who has been on I-95 at South of the Border, I-75 at Rock City, or I-90 at Wall Drug knows this well.

Thus, in the spirit of the Egress, I give you… The Thing.

After leaving Tombstone, Boney and I headed up route 80 until we intersected I-40 at Benson AZ. Heading east, it wasn’t long before we encountered signs for The Thing: “What is The Thing?” “Dare you to see The Thing?” “The Thing – Mystery of the Desert?” &c. 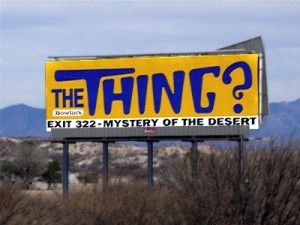 Unlike other stretches of American highway schlock (e.g., SOB signs start a good 90 miles before one hits Dillon SC), we didn’t have far to go before reaching the unincorporated wide-spot of Dragoon AZ, home of The Thing. That said, fear not! The Thing’s handlers make the most of concentrated signage carpet-bombing before you do reach it.

Guide books tell you that The Thing lives in nearby Cochise AZ, but I think that’s merely for GPS purposes. In actuality, The Thing can be found at exit 322, where it resides somewhere behind the pumps at the Johnson Road Shell/ Quickee-Mart, the only structure, it seems, in all of Dragoon. 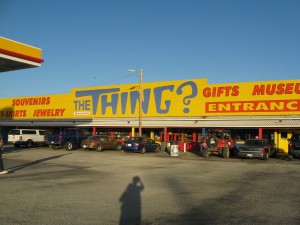 There is dispute as to who brought The Thing to its current domicile. The state historical society and the Pioneer Museum in Flagstaff maintain that it was the brainchild of one Homer Tate, an erstwhile carnival worker. Not so fast, said syndicated columnist Stan Delaplane, who claimed in a published 1956 interview that it was instead a local (bored?) attorney, one Thomas Binkley Prince. Either way, where to send thanks may never be entirely settled, since both of the principals have gone to that Great Sideshow In The Sky. This pearl of American culture is now owned and operated from afar by an Albuquerque-based company, Bowlins, Inc. Let’s just hope that they appreciate the magnitude of the caretaking responsibility they’ve assumed for this and future generations.

Regardless, you stop, you enter the Quickee-Mart, and you are immediately assaulted by the usual assortment of male enhancement dietary supplements, beer displays, postcards, cigarettes, bobbleheads, silk flowers, beltbuckles, t-shirts, and packaged snack foods. 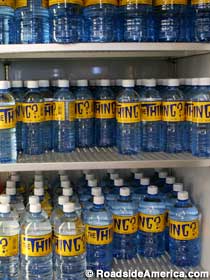 You find yourself looking around, expectantly. Something is different, but what? Then you look down and see that there are large yellow footprints on the floor, starting near the cash registers. They lead to the back of the store. There is a door which looks dungeon-esque along with a faux stone wall. Nearby there is an arrow-and-sign that rhetorically asks once again, “Dare You See The Thing?!?” For only $1, payable to the cashier in front, how can you say no?

I backtracked to the cashier and handed over my dollar. “I’d like to see The Thing,” I told him, as if it were the first time, and not the 546th, that he had heard that statement this day. He nodded without even looking up. The yellow footprints beckoned with more urgency now that I had been granted entry to the sanctum sanctorum.

I guess I expected to open the door and see The Thing standing in front of me, glaring. That is not the case. Instead, one finds a passageway that leads out back. It seems that The Thing lives in an extensive compound of half a dozen buildings – all single-story corrugated steel or cinderblock – arranged in a very large oval such that there is a central courtyard. There are stretches of high fence in between the buildings. There’s nothing of note in the courtyard itself, just some broken picnic tables and benches, dirt, scrub grass, and those yellow footprints on the cement. The buildings and fences, it appears, are arranged that way to form a defensive perimeter to keep prying eyes and non-paying guests out. Or perhaps to keep The Thing in?

I was the only person back there. I followed the footsteps across the courtyard and entered the first building. No Thing in sight.

Instead I was greeted by the oddest assortment of detritus that I’ve seen since I was last in my freshman dormitory’s basement.

Imagine that you have been tasked with creating a museum. That with which you have to work includes the contents of the local Salvation Army thrift shop, a number of mismatched glass display cases, cardboard and paint for signs, cars and appliances in any condition from the local junk yard, all items from the ‘free’ section of Craigslist, and mannequins seized when the recently bankrupted department store downtown was liquidated. This was the apparent scenario faced by Tate/ Prince at the Dawn of The Thing.

Inside The Thing’s compound, one finds a series of displays with no common theme except that they coalesced from the raw materials just noted. Old tractors that are falling apart. A few 1930s vintage cars, including one beat-up Rolls purported to have been owned by Hitler (complete with mannequin in back seat). A wax figure that looks like Charlie Chaplin if you squint. A display of steering wheels. A broken Edison phonograph. Zuni kachinas. An ancient Chinese stool. Excavated soda bottles. Odd wooden carvings of people being tortured in various historical settings. Framed reproduction Currier & Ives lithographs. Some dusty broken rifles. A large covered wagon with wax Indians creeping toward unsuspecting wax passengers and taxidermied oxen. A huge jumble of mason jars. Victorian furniture cast-offs with springs protruding from the frayed upholstery. Several saddles. A weird collection of painted driftwood. 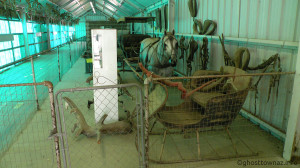 inside a grand exhibit hall

The kitsch here knows no bounds. There are signs next to all of the displays reading, “The Thing Is, This Is A ______.” But no Thing.

Soon I began to think that The Thing didn’t actually exist, but that the dumb signs, worded thusly, are the only connection to the semantics of the roadside ads.

Still wandering, alone with my thoughts in the last building and its impressive assortment of obsolete typewriters, I found in the corner ahead a cinderblock bunker perhaps a yard in height. It had a glass top, and over it hung a banner proclaiming, “Here Lies The Thing?” (not sure why the question mark). 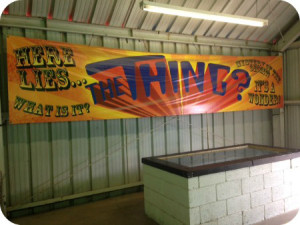 Approaching cautiously, peering inside, I found myself face to face with a tableau of two desiccated human mummies, apparently a mother and child. Their sunken eyeless sockets stared back at me, pleading, “this ain’t the Smithsonian… get us out of here!” The pair looked like Slim Jims that had seen better days. I suppose they were real, but it was hard to tell through the dirty glass and dust. 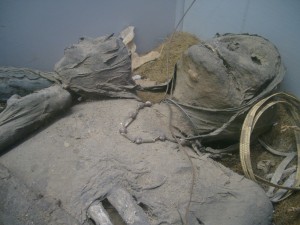 star of the show

Remembering the published 1956 interview, when Delaplane asked of the source of The Thing, a Prince family member said that “[a] man came through here… years ago. He had three of them he got somewhere. He was selling them for $50 [each].”

And now for all eternity. In Dragoon. Under dirty glass. Next to the mason jars and wax Hitler. A fate truly worse than death.

Boney-M, I thought, was so much better looking. I felt like heading out to the parking lot and dragging him back inside to charge viewers $1 myself!

But we still had a long way to go. I walked a few more steps and found that I was back in the Quickee-Mart gift shop. As I was leaving, more travelers were lined up at the cashier to hand over their dollars and see The Thing.

P.T. Barnum would be so proud.