Bone-man and I sailed east along I-10 until we connected with state route 90, at which point we turned south. At Sierra Vista, we followed state route 92, which eventually brought us to the odd little hamlet of Bisbee, Arizona.

Bisbee has a population of 5575, and is located 82 miles southeast of Tucson as the crow flies. Nestled in folds of the Mule Mountains, it was founded in 1880 as a small copper mining camp, but eventually grew to the point that the seat of Cochise County was moved there from the better-known Tombstone in 1929.

Bisbee is the site of the Copper Queen Mine, about which I’ve posted previously:

When commercial mining dried up in the early 1970s, Bisbee was headed for oblivion. Wisely, the town decided that marketing their mining heritage would potentially keep Bisbee alive. Tours were started. Shops returned. A funky little artists’ colony – one that has been visited by over 1M tourists in the past 35 years – has grown from the withering corpse of the original hardscrabble company town.

Sadly, the Copper Queen Mine was the only destination of our cross country trek that Boney and I missed. We arrived… just as a gaggle of Asian tourists, cameras-around-necks, donned their hardhats for the last subterranean trip of the day. Despite pleadings about the distances we’d traveled to get there, the mine foreman refused to allow an extra person on the sold-out tour. Oh well.

More than the mine, the entrance to which is decidedly non-descript, the visual ‘gem’ of town is the late Victorian Copper Queen Hotel.

It is located just down the street from its namesake. Originally offered to any local resident for $1 by the mining company as it closed-up shop, it was eventually purchased by an artist couple as the anchor to the soon-to-be-reborn downtown – now ranked one of the ‘quirkiest’ places in the US by AAA and AARP. Before long, not only artists, but counterculture types and hippies who were fleeing the gentrification of California, Arizona, and Colorado, found Bisbee much to their liking. Coffee shops and galleries cropped up in place of dance halls and saloons. And property values soared.

Quirky? Take for example the Ice Man Competition held yearly in town. It celebrates the guys who once delivered ice to people’s homes before electricity. Entrants race up 155 steps carrying 10lb blocks of ice with antique ice tongs to cheering crowds.

It’s a shame that wasn’t happening when we were there.

Back in the car, we wound our way up state route 80 to nearby Tombstone, population now 1504.

Tombstone was founded in 1879 by one Ed Schieffelin on a mesa above the Tough Nut Mine. He had been staking claims in the area, then still considered dangerous because of the presence of hostile natives. One of his colleagues had said that the only “rock” he’d find there was his own tombstone – hence the name of Schieffelin’s original claim, and then the town which sprang from it.

Lots on Allen Street – the main dirt thoroughfare in town – sold originally for $5 each. Soon, there was the luxurious Grand Hotel, an opera theatre, an ice house, a school, two banks, two newspapers (the Nugget and the Epitaph), an ice cream parlor… and more than 125 saloons, gambling halls, and brothels, all built on top of the labyrinthine mine tunnels below.

And of course Tombstone was the site of the immortalized Gunfight at the O.K. Corral on 26 October 1881.

Although it reached a maximum population of more than 14,000, by 1890, the mines started to dry up. Several devastating fires that swept through flimsy wooden buildings didn’t help matters. Tombstone’s population dwindled to less than 650 by 1910. And it was that precipitous population drop that preserved our site of main interest on this trip.

You see, history records the generals and kings and cardinals of days past. But it is the life of the common man, anonymous and forgotten, that is almost always lost to future researchers.

On 25 December 1881, the Bird Cage Theatre opened on Allen Street. 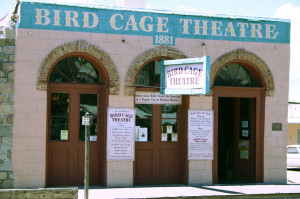 A favorite of Doc Holliday’s and Bat Masterson’s, it was a combination show venue, saloon, gambling parlor, and bawdyhouse, taking its name from the dozen curtained private boxes, called ‘cribs’ or ‘cages,’ that overlooked the main stage, and which were used for, er, visiting with very friendly barmaids. 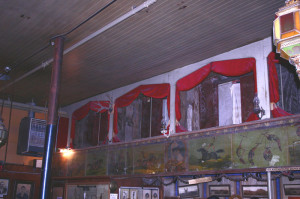 The year following its opening, the New York Times described the Bird Cage as “the wickedest, wildest night spot between Basin Street and the Barbary Coast.” Still, it drew some big name entertainers of the day – Lillian Russell and Lillie Langtry to name two. It was open 24/ 7/ 365 until it closed its doors eight years later, and is said to have been the site of the longest running poker game in history (in the basement) – one in which more than $10M changed hands over its eight years, five months, and three days in operation.

When the Bird Cage went bust in 1889, it was boarded up and abandoned. For over 45 years on Allen Street it sat. The town’s population had shrunk to the point that no one wanted the old building, and it was too much effort to tear it down.

When it was finally purchased in the mid-1930s, much to the shock of the new owners, the entire building was furnished and stocked as it had been on its last day in business. Nothing had been removed. Dishes, glasses, chairs, and tables were all still there. Bottles of liquor were lined up on the bar. Musty carpets and pictures and wallpaper stood sentinel. The player piano was sitting by the stage, and props were backstage. Beds and linens remained in the girls’ rooms. Plus there were more than 120 bullet holes in the ceiling and walls. It was an unprecedented time capsule of the common man’s Wild West, and one, to my knowledge, that has never been replicated anywhere else.

Don’t miss seeing it when you’re next in Tombstone.