There’s an interesting phenom I’ve noticed in the past when driving to Vegas. Depending from which direction you’re approaching, the Nevada border runs through some pretty desolate areas. Usually, there are no landmarks to tell where you are located. The road seems long and endless. You have to depend on the car’s odometer and count the miles yourself. But before you reach the Silver State, you’ll notice what appears to be a dark line just below the visual horizon, way in the distance. At first, what forms this dark line is not apparent. But as you get closer – you’re still miles away – you realize that the ‘line’ is created by buildings. Clustered buildings. All casinos. And all within feet of the border.

Casino owners crowd there because they want to be ‘first’ when desperate traveling gamblers cross into the Land of Legal Gaming. It’s funny to see all of those establishments right on the line – as if they’re aren’t more than enough video poker outlets elsewhere in Nevada to fill the need.

Anyway, as my articulated companion and I were approaching the California-Nevada border at Primm, I noticed ‘the line,’ and before long the individual casinos came into focus – half a dozen large buildings. And the most prominent of them is Whiskey Pete’s. 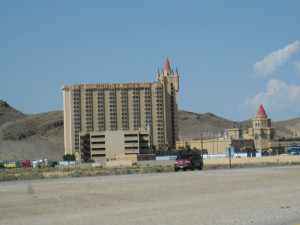 Whiskey Pete’s is both a casino and an adjoining hotel. It’s pretty big for being in such a God-forsaken place – almost 800 rooms and suites, a large swimming pool, several gift shops and restaurants, and a casino of more than 36,000 sq ft. It also has a monorail that connects to its neighboring casinos across I-15.

Whiskey Pete’s namesake was a real man – Peter MacIntyre, a gas station owner in State Line, NV, back in the 1920s. Selling petrol for pennies didn’t make much of a living, so Pete decided to supplement his income with bootlegging. And apparently he did quite well at it. His gas station was known, surprisingly, as Whiskey Pete’s. When he died in 1933, Pete asked to be buried on his property with a bottle of hooch in his hand so that he could stay close and watch over the illicit activities from the Great Beyond (note: when building the casino that bears his name in 1977, the construction crews accidentally disturbed his unmarked grave and he was subsequently reburied down the road at a site where once had been located his copper stills).

Anyway, a developer who decided to build in State Line, Ernest Primm, modestly named his new wide-spot-in-the-road after himself; before long, Primm, NV, sported several gaming complexes: Whiskey Pete’s, Buffalo Bill’s, and the Primm Valley Resort. And normally, unless you’re totally addicted to gambling, most of us zoom right past Primm on the interstate in our rush to get to the Vegas Strip.

But you’d be missing the rather unusual if you did. And I don’t mean Whiskey Pete’s final resting place.

I exited the highway with the Grim Reaper, covering him with a jacket in the back seat after I parked. I wasn’t going to be long, but there are two interesting cars to see inside the casino, even though they are little-advertised in either print or highway billboard format.

In December 1941, the U.S. Secret Service found itself in a quandary. The Japanese had bombed Pearl Harbor the day before, and the President was to address Congress. Normally, FDR would have ridden from the White House to Capitol Hill in his limo. But everyone was very tense about possible Japanese agents-provocateur being nearby and possibly making an attack on the person of the president. An armored car was needed for the short trip, but the presidential limo was not hardened. Then, one Secret Service agent remembered seeing an armored car at the U.S. Treasury Department’s impound lot. It was a 1928 Cadillac 341A Town Sedan that had been custom built for high-ranking gangsters; both Dutch Schultz and Al Capone had made use of it, in no small part because of its lead-filled doors and inch-thick glass.

[despite its construction, the car was never involved in any actual gunfights; Schultz died in 1935 after being shot in the men’s room of the Palace Chophouse in Newark, NJ, and Capone died of the ravages of neuro-syphilis in 1947 at his mansion in Palm Island, FL]

The car had been seized from Capone by the government when he was convicted of tax evasion in 1931. That is how it came to be used by FDR to drive to Congress to request a declaration of war ten years later. And now it resides at Whiskey Pete’s.

The second car on display is not in as good condition, but it’s had a harder life. You see, in April 1934, Clyde Barrow and Bonnie Parker – yes, that Bonnie and Clyde – stole a brand-new Ford Model 730 Deluxe Sedan with a powerful V-8 engine, and used it for the next six weeks as their getaway car during a number of robberies and killings. The joyride ended in late May in Bienville Parish, Louisiana, when they were ambushed by a lawmen’s posse and the car was riddled with over 100 bullets. 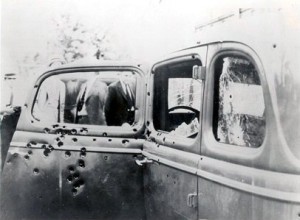 The Death Car then

Since then, the Death Car has traveled to carnivals, amusement parks, flea markets, race tracks, and state fairs all over the country; at one point, hucksters charged the luridly-obsessed $1 to sit in the front seat. But fearing that overuse might destroy the automotive cash cow, the car was taken off the touring circuit and then spent time in a museum in Reno and several casinos before winding up in its now-permanent (?) home at Whiskey Pete’s in July 2011. 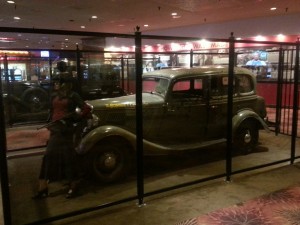 [in case you missed my earlier post on Bonnie and Clyde, here it is again: http://alienistscompendium.com/?p=974]

And don’t be fooled by imposters! The prop car from the 1967 movie Bonnie and Clyde is often passed as the Death Car, but Whiskey Pete’s has the real deal. And while you’re there, don’t miss, next to the Death Car, Clyde’s bullet-tattered Shirt of Death also on display. In the same case with the shirt is a formal-looking notarized document from none other than Marie Barrow, Clyde’s sister, attesting to its authenticity. 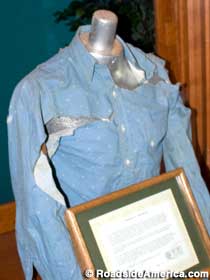 Both of these cars are sitting in the middle of the casino floor, albeit behind glass, near the cashier’s cage. All around there are flashing lights, ringing bells and whistles, and the other expected sensory stimuli of a Nevada gambling house. They are on display 24/ 7/ 365 for free. And yet, both vehicles were being ignored by the addicts mindlessly feeding quarters into the surrounding machines. I seemed to be the only one paying them attention.

Now, if only Whiskey Pete’s could just track down Dutch Schultz’ ‘Urinal of Death,’ THAT would be impressive!