Boney-M and I departed San Juan Capistrano under the still-risen full moon. The sun’s arrival was only hinted on the horizon, but traffic was already heavy with worker bees heading for their cubes downtown. Luckily, our early start avoided interminable delays, and we cleared the potential freeway bottlenecks and veered east toward Vegas.

As the sun fully rose, the rolling brown California hills came more clearly into view. Suburban sprawl eventually gave way to habitation and retail blight that was increasingly sparse. Scrub vegetation, dry washes, gullies – I had come this way before, back in 1988, when I first visited Vegas from Los Angeles; while the extent of civilization has spread outward, the relative isolation past the city limits seems not to have changed very much.

Route 66 was one of the original roads within the U.S. Highway System, a project initially begun in the 1920s to form (relatively) unbroken connections that would span the nation. In the case of 66, it was officially dedicated in 1926 – before its roadsigns were even in place – and stretched 2448 miles from the East (actually, Chicago) through Illinois, Missouri, Kansas, Oklahoma, Texas, New Mexico, and Arizona, on its way to the Pacific. It became an icon of pop culture long after its initial usefulness had been superceded by larger and faster roads, and it spawned both a hit song and a television series. While Route 66 as a national highway has long since been decommissioned – officially in 1985, to be exact – large sections of the original blacktop remain in varying states of decay. Some parts of old 66 have weeds growing up through the asphalt, a desolate and poignant subject for intrepid photographers. Other parts of old 66 have been incorporated as less-traversed but still functioning state highways. Ironically, the new super-interstates that killed 66 often parallel the old road, and many times within line of sight. This is especially the case in southern California, where the ghost of 66 extends from Santa Monica to the border with Arizona at Needles.

One town, well into the Mojave Desert, at which the modern I-40 and old 66 intersect is Barstow. There, the apparition is still very much alive.

For one thing, the furthest western segment of Main St in Barstow actually is Route 66; this part of the road wasn’t abandoned like so many other stretches, here because it went straight through downtown as the old commercial section. Most of the vintage storefronts still have ‘66’ painted on their brick walls, or display neon signs with the logo in their windows. Very 1950s-ish.

But drive a little further into Barstow, and leave Main St for a short detour as we did, and there’s something of even greater interest.

Fred Harvey was an Englishman who emigrated to New York City as a teenager before the Civil War, and who started to develop in the 1870s what would come to be known as Harvey House lunchrooms, restaurants, souvenir shops, and hotels. He created these businesses along rail lines serving the American Southwest; his was basically the first dining and lodging chain in the United States. Though air travel and the automobile eventually spelled doom for his company, it was through his promotions of tourism in the late 19th century, the quality of his food, and the known civility and comfort of his establishments, that the “Wild West” was tamed and opened to those who weren’t cowboys or prospectors.

Harvey also knew that all of those hungry and tired travelers would want to see ‘real’ Indians while they were out West. A born entrepreneur, he wasn’t about to disappoint them. Although Harvey is credited with encouraging an appreciation of native American culture amongst previously clueless Easterners, he wasn’t above having some faux-Indians (or real Indians who were staged and scripted) interact with the public, much to their delight. And the showman in him knew the best way to get the (male) public’s attention – attractive young women in form-fitting dresses as tour guides. This tactic also worked for the waitresses in Harvey’s restaurants (and even spawned a 1946 movie called The Harvey Girls starring Judy Garland). But before you think otherwise, Harvey girls were chaste and innocent, at least in Harvey’s vision. They had to be unmarried, and weren’t allowed to date. They lived in shared quarters with a Harvey dorm mother as supervisor and chaperone. While the money was good, not many young women wanted to lead this cloistered existence forever, so there was a fair degree of turnover; there was always a ready supply of other pretties to take their place.

When Harvey died in 1901, his hospitality empire was thriving. Some news accounts, used for later publicity, reported his last words to his sons as “don’t cut the ham too thin, boys.” However, there is a slightly different tale from those who actually knew him. Apparently, his sandwiches of ham or cheese with an extra slice of bread for fifteen cents were known everywhere for their value. but Harvey had to make his profit to stay in business. On his deathbed, several of those who were present quoted him murmuring instead “cut the ham thinner, boys.” But being remembered as a cheapskate is not good for image.

Wholesale decline accelerated in the 1960s. Of the original eighty-four Harvey establishments, very few are remaining, and most of the iconic ones have long passed from the scene:

But a few of the vintage places are still around. In Arizona, the Hotel El Tovar still functions at the south rim of the Grand Canyon, and the Fray Marcos in Williams operates as a boutique inn, as does La Posada in Winslow. In neighboring New Mexico, the doors of La Fonda are still open in Santa Fe after all these decades.

And then there’s the Harvey House in Barstow. It was originally known as Casa del Desierto, and was built by Harvey in conjunction with the Atchison Topeka and Santa Fe Railroad after a much smaller cafe and boarding house on the site had burned in 1908. 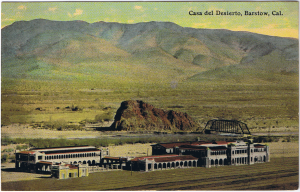 Casa del Desierto has not functioned as a hotel and restaurant since 1959. ATSF closed their station in the building in 1973, and now the casa operates as the (unstaffed) Barstow Amtrak station. It also houses municipal offices, the Western America Railroad Museum, and the Route 66 ‘Mother Road’ Museum. But at least it has not been demolished.

The bone-meister and I turned off Main St and headed along a winding two lane road that leads down to the railroad tracks. There isn’t much around. Before long, we reached the impressive Moorish-flavored edifice that once welcomed weary travelers. At first I drove around and didn’t see any signs of life, even though this was early-morning on a weekday. The building looked to be in excellent shape, making it all the easier to imagine how it must have appeared as a smoke-belching steam locomotive or early diesel engine pulled up alongside the platform and disgorged its ravenous humans more than a century ago.

My historical daydream was broken by a group of motorcyclists who appeared on the far end of the parking lot. As they neared me, I determined that they were all riding Harleys. And were all wearing red bandanas in lieu of helmets. And were all speaking German.

I’ve noticed from past trips out West that Europeans love Route 66.

I guess I looked friendly as I stood outside of my car. One of the pack approached me.

I tried to explain how I had just driven from Los Angeles. Much smiling, but not sure about much comprehension.

“Klaus” – the middle-aged leather-clad-and-ponytailed speaker gestured at someone behind us in the group – “here long ago years. He love und tell us to ride back vis heem. Vee buy zee Harley, ja? Great bike. Many noise.”

“Danger… interestink… good fun people,” I thought. Right. I was so tempted to show the pack my rider in the back seat and see their reaction. But America already has a reputation oveseas, and I suspected my attempt at lightheartedness might not make the translation. Heck, I wasn’t quite sure how I’d explain my back seat memento to even native English speakers! I decided against that option.

After exchanging some simple pleasantries, the pack folded their maps, remounted, and roared off in the direction of LA.

“Let’s go, Boney. We’ve still got stops to make, and we need to be in Vegas by lunchtime.”

And there were still 1725 miles to go before Mecca.