Prior to the passage of the Anatomy Act of 1832 (2 & 3 Will. IV c.75), it was illegal in Great Britain and the empire to own, possess, or dissect any human body except that of a convicted felon who had been sentenced to death and post-mortem anatomization. As the number of capital sentences was far outstripped by the demand for bodies, however, there had developed a robust and entirely illegal trade in human remains since the late middle ages.

The sensational crimes of Burke and Hare

brought the need for legal bodies to a head. With the passage of the Anatomy Act which permitted wider procurement of bodies, the black market began to wither. Other countries soon followed suit with similar laws. Before long, guards no longer had to be posted at cemeteries to prevent the resurrectionists from snatching grandma before she had turned to dust.

And although the trade in human remains remained tightly regulated at first – individual bodies were numbered and tracked by the UK Office of the Home Secretary – at last there existed in the English-speaking world a means by which physicians, surgeons, and students could study anatomy without having to sneak around at night with shovels and lanterns after paying bribes to night watchmen.

At first the corpses obtained were those of the unclaimed dead, mostly from poorhouses and jails. But in time, progressive individuals began to will their mortal remains to medical science for this expressed purpose.

Predictably, it wasn’t long before a commercial market in anatomic specimens developed. An early example is seen through Millikin & Lawley, a company located in London that sold medical “teaching tools” during the Victorian era. M&L became the largest supplier of human skulls and skeletons by the turn of the 20th century, its location in Pall Mall near the medical school of King’s College helping growth in no small part.

M&L marketed their bones by stressing the quality – that the skulls and skeletons were from the continent, especially Italy and France (do those countries produce better bones?) Apparently many medical students bought their study aids at M&L and then a robust secondary market sprung up as those nearing graduation sold their items to incoming students. Thus, the bones were recycled year after year and class after class as a form of educational hand-me-down.

In add’n, M&L sold medical and surgical supplies, and they rented “magic lanterns” and slides for both didactic and amusement purposes. If that weren’t enough, M&L also contracted with entertainers such as conjurors (magicians), ventriloquists, and handlers with trained animals for parties and other festive gatherings.

But back to the bones. In the 1880s and ’90s, M&L’s most popular item amongst medical students was the “half skeleton.” This consisted of a latched pine box containing a set of human bones – a full skull and vertebral column, along with half (i.e., one side) of the rest of the bones of the body: one hand, one foot, one humerus, one radius, one ulna, one femur, one tibia, one fibula, one scapula, one patella, one clavicle, seven ribs, and a sawn-half each of a sternum, a pelvis, and a hyoid bone. On the inside of the lid of the pine box was glued the company’s label, and M&L also advertised with applique logos on the bones themselves!

While a less costly half-skeleton might have worked for students on a budget, there was even greater demand for whole articulated skeletons. Ads for such can be found in late 19th century publications on both sides of the Atlantic. And after a while such ads weren’t aimed merely at the medical community. The tracking of individual bodies to licensed clinicians, seen at first in the 1830s in the UK, gave way in latter years of the century to a lucrative commercial trade in bones to just about any interested party.

Artists comprised one non-medical group that sought bones. Another was the Independent Order of Oddfellows (IOOF).

IOOF was a fraternal order of the 17th and 18th centuries (UK) and 19th century (US), second in prominence and membership only to the Freemasons. Part of the secret IOOF initiation ceremony required the presence of a human skeleton in a mock coffin; a candidate would be blindfolded, draped with chains, and led to a place after which the blindfold would be removed and the frightened neophyte found himself in the flickering candlelit presence of Old Boney (the allegorical setting used to impress upon the initiate the ephemeral nature of life, his own mortality, death-as-the-great-equalizer, and the need to do charitable work and walk the straight and narrow). 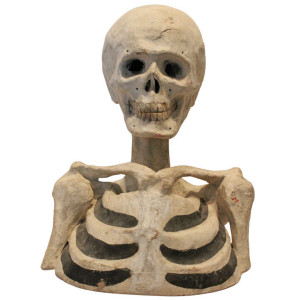 but most lodges wanted the real deal.

Many times, the desired authentic skeletons were obtained from medical schools which had gone defunct or were upgrading the specimens in their collections. Perhaps some skeletons were pilfered by faculty members who were also Oddfellows. There is even rumor that Oddfellows’ regalia catalogues in the 1880s sold initiation skeletons by mail order. 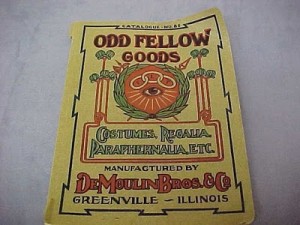 Although far from common, these vintage IOOF skeletons still periodically surface. As lodges fold because the current membership is dying off, their property is sold to settle taxes and other debts… only for someone to find a skeleton in the closet. Literally. And though often in rough condition from years of storage neglect, more than one estate liquidator or realtor has come unexpectedly face to face with a dusty but still-grinning skeleton in its original silk lined coffin emblazoned with the IOOF emblem on the lid.

There have even been times in which a local police department was summoned to investigate the uncovering of an “unknown body,” but once no signs of foul play are uncovered by the men in blue and the medical examiners office, the bones are good to go. If ever determined to be of native American origin (which has happened, albeit rarely), the bones are repatriated to the nearest federally recognized tribe. Other skeletons of unknown provenance are sometimes buried. But more times than not, such skeletons wind up at auction. And from there they have found their way to Halloween parties, bars, galleries, libraries, dens, museums, and antique shops. One IOOF skeleton is even said to have enjoyed a prop-cameo in George Romero’s classic 1978 film, Dawn of the Dead, though I’ve been unable to confirm that at present.

“Bones are all that survive of the body. They are keys to our collective past and reminders of our own mortality, so it is no mystery that they have a magic aura for artists, for the faithful of many religions, for collectors, for all of us.” ~Barbara Norfleet (1993)

While I didn’t go into surgery, throughout my medical education I was always fascinated by anatomy and osteology. And readers of this blog will not be shocked to learn of my interest in the slightly macabre. Being a physician with such tastes, it seemed only natural that I should locate an old skeleton for my office. But it had to be an old one. I didn’t want a recent import from China or India. I wanted a delicate patinated 19th century specimen that probably hung in the corner of an anatomy lab while men in bowler derbies and starched collars with handlebar moustaches went about their work.

The old skeletons, by the way, can be identified by the salt-cured cartilege of the rib cage (modern skeletons use rubber or synthetic composite instead) and the articulation with brass (modern bones having stainless steel attachments). Plus the IOOFs look old and weathered. You can just tell.

After some inquiry, I contacted a dealer in the LA ‘burbs who had located the very type of old skeleton I wanted. He was said to have started life (death?) at a California medical school before moving into the fraternal world. He was then uncovered in a now-defunct IOOF lodge in the Bay area, found in the basement in his coffin lined with the San Francisco Chronicle from the 1880s. He was in marvelous shape, missing only one tooth, though his coffin was no longer available. I negotiated for him, and before long I was Boney-M’s new owner.

Now I just had to get him back to the east coast in one piece. Shipping was inadvisable given his age and fragility.

So on the morning of the second day of the trip, I was sitting in my rental car, the engine turned off, outside the appointed meeting place at 5:00 a.m., in the pitch black. Why? Because I had to make it to Las Vegas by midday, and the Los Angeles morning traffic threatened to be interminable if I (we?) were to get a late start. The seller was kind enough to meet me at an ungodly hour to allow for an early start. Thus we connected, we loaded in darkness – it all had a slightly illicit feel to it, carrying bones out into an alleyway with the sun not even up – and before long the car was pointed to Sin City, almost 300 miles distant, with Boney-M secured in the back seat.

Plus there were six days and almost 2000 miles to go before we would reach Mecca.