The day was clear and sunny as it began its fade into impending twilight. I was driving along a secondary road in the far southwestern corner of Arizona, less than a dozen miles north of the Mexican border. There was little traffic, just clear sailing, no obstacles, and a tank of gas as the sun started to dip behind the nearby hills. In short, a perfect and relaxing early evening for a drive. That is, until I saw it up ahead – ‘it’ being a U.S Border Patrol check-point. A sign by the side of the road commanded those traveling north to stop ahead to submit to inspection, and I could see that the armed federal agents had a dog which was sniffing each and every vehicle.

Normally, this wouldn’t present a problem. I wasn’t in a hurry to reach my next destination, the car wasn’t stolen, I don’t do drugs, I wasn’t intoxicated, and I’m a natural-born U.S. citizen.

I did, however, wonder if the revolver sitting on the passenger seat next to me might present a problem. That… and the human remains boxed up in my back seat.

But I’m getting ahead of myself. I need to turn back and start at the beginning.

Sustenance. Procreation. Self Preservation. All basic instincts that have allowed the human species to survive over the millennia. I would add another to the list: Wanderlust. Ours is a species that travels. From those first tentative steps from the Cradle of Civilization, humankind has desired to confront the unknown – to the far corners of the Old World, across the unknown seas, throughout the new continents, to the frozen poles, deeply into the bowels of the earth, and thence into outer space. “To boldly go where no man has gone before,” in the words of Gene Roddenberry.

For the ancients this drive was often spurred by the need for new hunting grounds and other natural resources that were in short supply, or that were being contested by other groups of hominids. But in time, the drive became a journey unto itself. And from that evolved… the Great American Road Trip.

I would argue that GART is no less primal, but merely involves the automobile and affordable petrol, the roadside tourist stop, and the ability to burn one’s own CDs more than the ancients could have understood. GART may have its roots in the grand tours of the continent undertaken by well-heeled 18th Century Europeans, but it has evolved in a special way given the vastness of North America, the grind of the 21st century workplace, and the trailblazing of visionaries like Jack Kerouac, Hunter S. Thompson, and P.T. Barnum.

Many years ago, my erstwhile spouse and I traveled by minivan from Vancouver to Toronto over a week’s span. I’m not certain how she enjoyed it, but for me it was an eye-opener. I mean, how many other reasons would one have to visit places like Moose Jaw, Saskatchewan, and Medicine Hat, Alberta? I saw fields of canola that stretched to the horizon, emerald-green mineral lakes that were indescribably clear and cold, and I ate more Caesar salads than I thought possible (Canadians have an odd affinity for the Caesar salad out west for reasons that remain unclear, though they sadly eschew the anchovy). Alas, there are few man-made attractions ‘up there.’ It’s mostly the beauty of the great outdoors. And knowing firsthand that the inhabitants south of the border are natural hucksters, and enticed by books like Roadside America, I wanted at some point to repeat the epic driving journey in the lower 48.

Recently, the stars aligned correctly. Work responsibilities, bills, a conference I wanted to attend, and family duties all fell obediently into place. The Wild called, and I answered. Impulsively, I sent a few confirmatory emails, registered for the meeting, bought a ticket on Southwest Airlines, arranged for a one way rental car, told my office they’d see me later, and took off.

The trip got off to an inauspicious start. For those of you who have traveled Southwest Airlines before, you know that boarding number is all-important. Your seat is not assigned, but instead you board like cattle with the number assigned to you at check-in, and then take whatever seat is still available. There are three boarding groups – A, B, and C – with each having sixty numerical slots. Southwest likes to joke that “all of our seats are first class,” but road warriors know better. “All of the seats are degrees of purgatory,” is more like it, but there are some that are far worse than other.

The sufferer-to-be can check-in online 24 hours – to the second – before the scheduled time of take-off. A delay of even a minute can mean the difference between a tolerable numerical assignment, and a center seat in the back of the bus so to speak. Usually I’m good at this, and time my online check-in perfectly, even if I’m in a meeting and have to do it via smartphone. On the day in question, though, I was distracted by uncooperative patients, and was mistaken to the exact time of my departure. Unfortunately, I logged onto my Southwest account ten minutes after the desired time. B49. Not good, as that number put me only 11 seats in front of a Hellish C-group assignment. And as veterans of Southwest know, anything ‘C’ is a guaranteed lousy seat.

The next day when I arrived at RDU, there seemed to be a lot of large people lined up for my flight to Burbank, California. Large people with what looked like impossibly oversized carry-on luggage. Of course this was my imagination fed by B49. But it seemed that the boarding process took longer than usual as wave after wave of large people holding A and low-B boarding passes filtered down the gangway. Finally it was my turn. Were there even any seats still available? I made my way along the ramp and finally turned the corner inside the plane to see what was left. It didn’t look like much. Bulkheads filled. The first half of the plane filled except for cramped center seats. Luckily I had checked my bag, so overhead bin space was not at issue. I slowly squeezed my way past those straining to stuff their belongings under seats. I was still scanning, against hope, for something available and tolerable. I knew that a window seat, my preferred, was almost certainly impossible this far back in the boarding parade.

But then I spied it: one remaining window seat. Granted, it was in the very last row, but it was open, and it was window. Some quick mental calculus revealed that there were three potential ‘takers’ ahead of me in the narrow aisle, but they all seemed preoccupied with analyzing overhead bin space above other seats, and were ignoring my intended. With newly found enthusiasm I squeezed past those would-be spoilers and made it to the seat!

While blueprints of the Boeing 737-300 don’t show it, and Southwest denies it, I swear that the walls of the interior begin to taper ever so slightly to parallel the fuselage as it approaches the tail of the plane. My window seat was in the furthest rear echelon, right by the galley and restroom. Over the years, Americans have gotten larger and planes have gotten cost-conscious (read: packed with more human flesh). The Golden Age of Air Travel has joined the Dodo Bird. And when you’re dealing with seats that are cramped at the best of times, the loss of even an inch of shoulder clearance is bad news. Add to this my dismay when the coup de grâce was delivered – a fellow who looked like a Duck Dynasty extra squeezed into the center seat next to me. I felt palsied and was unable to move from the unnatural position my limbs had to assume to accommodate the unnatural space. There were medieval tortures not unlike this.

And to think, this segment of the flight, to Denver, was ‘only’ four hours long.

There was no chance of sleep, or even of holding a book and turning pages, in such a space, so I’m not certain how I passed the time. Perhaps I was in a pain-induced delirium? But survive I did, and luckily the Duck Commander got off in Denver. I was able to unfold myself and move to a bulkhead seat with some legroom, and no discernible wall issues, before the plane boarded its next complement of passengers. And just as the old adage notes that if you’ve been hitting yourself on the head with a bottle it feels good when you stop, that new bulkhead seat felt sublime for the second leg of the journey. Which is perhaps part of Southwest’s evil plan all along?

And then, Providence rewarded my earlier torment – a baby seated near me was totally silent during the second flight, and next to me was a possibly anorectic female passenger who didn’t spread over onto the armrest as had the Duck Commander. The ability to partially doze and stretch. Some modest breathing room. Heaven.

The terrain passed 35,000 feet below as we headed further west. ‘Vast’ is the word that comes to mind, especially when I knew that I’d be driving that same endless expanse headed east before long. The snow-capped Rockies gave way to brownish hills and plains, and then finally the suburban sprawl of the coast with the Pacific in the distance. After a brief stop in San Jose, the plane made its way to Burbank, and as we landed, the thermometer read 89’F (compared to sub-freezing temps when I had left North Carolina earlier that day). 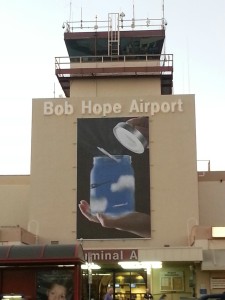 Bob Hope International Airport sounds impressive – perhaps it has a single flight to Mexico or Canada? – but is a small complex compared to LAX. However, it’s easier to navigate than its neighboring behemoth. They unload passengers from both the front and the rear of the plane via moveable stairs, and then you pick up your luggage on the tarmac – very 1950s. I was able to grab my bag and walk to the off-site car rental shuttle without difficulty as the sun was setting. And lo! Budget Rent-A-Car had reserved for me a new Ford Fusion. I had never driven one before, but as a previous owner of two Priuses, I know the cost savings of driving hybrids over long distances. And blessedly, the Budget staff didn’t badger me for additional rental car insurance as they always do, and which I always refuse as they shake their heads in sad disbelief. They just handed over the keys and bade me farewell. The gods again were smiling.

But there was no time to bask in these good turns of fortune. I stopped at an Albertson’s to get deli cold cuts and other provisions, but as traffic was heavy on I-5 south, I had to proceed post-haste to the Capistrano Inn 70 miles south before it was late. My body, recall, was still on eastern standard time.

In the morning – the very early morning – I had to meet my rider and begin the journey east.