When I was last in London, there was a thought-provoking display at the British Museum on the pharmaceutical-centered life of those in the modern Western world. I’ll let the text of the display speak for itself:

Cradle to Grave, by Pharmacopoeia

Cradle to Grave explores our approach to health in Britain today and addresses some of the ways in which people deal with sickness and try to secure well-being. It was created by Susie Freeman, a textile artist; David Critchley, a video artist; and Dr Liz Lee, a general practitioner. The two lengths of fabric illustrate the medical stories of an average man and woman in the UK. Each stretch contains over 14,000 individual pills, tablets, and capsules, the estimated number prescribed to every person in Britain in their lifetime. 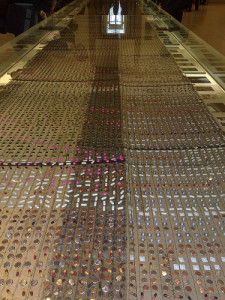 This does not include remedies that we might buy over the counter, which would then require about 40,000 pills total for each person over a lifetime.

Some of the treatments are common to both genders: each starts at birth with an injection of vitamin K and immunizations, and both take antibiotics and painkillers at various times. Other treatments are more specific. The woman of this display took contraceptive pills and then hormone replacement therapy in middle age. The man had asthma and hay fever when young, but enjoyed good health until his fifties. He finally stopped smoking after a bad chest infection when he was seventy. He was treated for high blood pressure over the last ten years of his life, and finally had a heart attack and died of a stroke in his mid seventies. He took as many pills in the last decade of his life as he did in the first sixty-six.