My earliest recollections of slot machines – not that I was actually playing them back then, mind you – involved lights flashing, sirens wailing, and the delightful sound of clink-clink-clink as coins dropped into the metallic catch pans below. From Vegas to Atlantic City to cruise ships, it was the same. Even if the actual dollar amounts weren’t princely, it sure sounded that way. 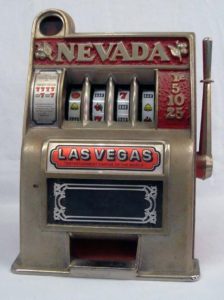 But then technology interfered.

There are just under 1,000,000 licensed slot machines in operation in the United States at present, and hardly any of them spit out coins anymore. Things changed in the 1990s. Now, you insert your club card or paper bills into a machine’s feeder. When you win, the machine still makes noise – sometimes even poorly-simulated recorded metallic clanking sounds – but out comes a slip on which is a barcode, and that is what you take to the cashier’s cage to redeem for real money.

No more buckets full of quarters. No more dirty hands. It’s all so sterile and lifeless.

In the 1990s, technology abbreviated as ‘TITO,’ or ‘ticket in ticket out,’ became widely available. It’s not that the casinos were necessarily killjoys, but TITO allowed them to cut down on the manpower needed to run their businesses. Apparently it takes a lot of staff to keep the change machines filled, keep the slots stocked (the average quarter machine, for example, holds $1k worth of coins at any given time), and then fix the machines when the inevitable jams occur. When it all changed over to paper – card/bill in and slip out – far fewer staff were needed, helping the casinos’ bottom lines.

Indeed, the migration away from coin machines was motivated by reasons even beyond mere maintenance and having to stock change on the casino floors and back rooms. From a casino’s point of view, the key to successful slot play is to separate the player from his money as efficiently as possible. So when a gambler inserts a $20 bill into today’s slots, the money buys “credits.” The gambler is now playing with (emotionless) numerical credits, just numbers on a screen, and not hard-earned cash. And there’s less incentive for one to cash out when a win is registered because that player ends up with a piece of paper in hand, not money. Sure, the paper can be taken to the cashier’s cage. But it’s much easier to just insert it in another machine and play until it’s all gone. Casinos like that.

It’s unlikely that TITO will be rolled back in favor of coins on a large scale. The current system is just too convenient for both casinos and hardcore gamblers. But, as Mike Spinetti, owner of a Vegas gambling supply house, recently offered, “a certain segment of the population still loves playing the old slots; they’ve really had a resurgence in the past couple of years.”

So, the last time I was in Vegas, I spoke to locals and went on a search to see if there even were any coin operated machines left in the area.

None of the high-profile casinos on the Strip could be bothered with them. The only place on that famous boulevard that still has coin machines is Slots-A-Million, owned by and adjacent to (the decidedly run down and dated) Circus Circus. This place needs a good steam cleaning, and even a nostalgia hound such as myself was turned-off, clanking $1 and 25c coin machines or not.

Moving toward Fremont Street, The D Casino has a so-called Vintage Room on the second floor that has a number of coin-ops still in operation. The Golden Gate also has a smattering of the older machines, though none that date as far back as its founding in 1906. Sadly, Bugsy Siegel’s former place a couple of blocks away, El Cortez, claims to have antique coin-ops on site, but in actuality has them on display in the lobby, and when I was last there, none were functional.

Traveling further from town, the Eastside Cannery Casino, past McCarran International Airport and the I-515 connector, was the first establishment to bring back the coin-op machines following the widespread introduction of TITO, and twenty years later there are still a few on the premises.

And for the adventuresome who are traveling out-of-state, 30 miles south of the Strip in the middle of the desert on I-15 is the wide-spot/ rest stop town of Jean. This is the home of the Gold Strike Casino (as well as the Bonnie and Clyde Death Car exhibit) and not much else. However, over half of the 400 machines at the Gold Strike are of the paperless variety.

So yes, with a little effort, one can still find a slot into which to drop a coin in southern Nevada. If readers know of any other places, please let me know.