[Our day-sponsor for this post is arguably my youngest subscriber, Lucas Artigas, of Apex NC. Lucas, don’t read this when you should be paying attention in class. I know it’s been rough these past four months, but it’ll get better. If not, the motel might need a manager. Stay in touch.]

“There is nothing scarier than a clown after midnight”

That quote has been attributed to Alfred Hitchcock, Stephen King, and Vincent Price. Regardless of the source of the bon mot, it reveals a truism. Clowns, in the dark, tend to be disturbing.

And of course, we all know that cemeteries, in particular old spooky ones, give just about everyone the willies.

So let’s combine them on your next roadtrip, in Tonopah NV.

Little more than a widespot on SR 95 at the halfway point between Vegas and Reno, Tonopah, the seat of Nye County, boasts a population under 2500. The town itself, then called Butler City, was founded in 1900 by the eponymous Jim Butler, a miner looking for a lost burro. Angry at the dumb beast, he picked up a rock to throw at it once located, and noticed the unusual weight of the projectile. It turns out that he had stumbled across the second richest silver lode in Nevada history. But it was not Butler who was to strike it fabulously wealthy. One George Wingfield, a faro player briefly turned dealer at the hamlet’s soon-to-open saloon, used his winnings to invest in the Boston-Tonopah Mining Company, which, within five years, netted him a bank account of $30M.

Fortune seekers flooded into this hardscrabble town in the middle of nowhere. There was a plague that went through the population in 1902 – the etiology remains mysterious – which killed many of the inhabitants. The town’s only cemetery filled quickly, and by 1911, it had over 300 interments, then-rivaling the living population of the downtown. The boneyard was closed because it had run out of space.

Wingfield predicted the town’s imminent demise, cashed out, and moved elsewhere. Industry died. By 1920, Tonopah and the immediate environs contained less than half the population it had boasted fifteen years earlier. Things went from bad to worse. Unless you work at the now-nearby Tonopah Test Range and Nuclear Site, there’s not much economic activity in the area once the easily mined ore had dried up.

But people do need a place to stay when passing through, esp if they don’t want to drive another 70 miles to the next wide spot. And that brings us to the Clown Motel.

Not only is the inn’s lobby filled with images of clowns, but each room keeps the unsettling theme as well. From Bozo to Ronald to Punch, they’re all there in one form or another. And folks who have weathered the night as guests swear that the eyes of the pictures and figures follow you as you move around the premises. 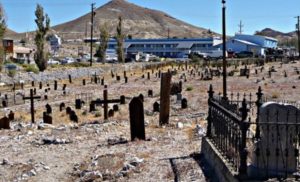 So if you get a bit unnerved and need fresh air, you can walk outside… and gaze at the overflowing cemetery sharing the common property line.

Oddly enough, the Clown Motel gets a 3.5/ 5 star rating on Trip Advisor.