My maternal grandfather, James Gilbert Gove, was born in 1884 and raised in the tiny English village of Appley in Somerset. He was a stonemason by trade, and in 1913, age 29, he found himself working jobs on nearby estates and trying to support a wife and growing family.

I suspect he needed money. He joined the local militia, much as people do today when enlisting in the National Guard to earn extra income and educational opportunities, and gain some camaraderie. 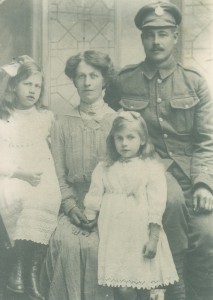 I mean, it’s not like there was a war ongoing at the time or anything.

Mysteriously to his descendants – he had no musical training of which anyone knows – there is an extant photo of him with his unit, a territorial battalion of the Devonshire Regiment, holding a tuba. He seems to have been assigned to the regimental band.

Gove and his tuba, back row, far right

Granddad caught wind that his unit was preparing to ship out… to the far reaches of the Empire. To India.

Apparently he didn’t want to go to the other side of the globe.

It was then that he learned that the Royal Engineers were recruiting in the area. Given his building experience and training as a stonemason, he correctly surmised that they might want his services.

He transferred from the Devonshire Regiment to the 505th field company of the Royal Engineers, and promptly left for France.

France was going to be better, right? It’s a whole lot closer than India.

In later years, Granddad spoke little of his life serving in the trenches and defensive earthen fortifications in Flanders. But he did say that there were times in which he was speaking to fellow soldiers standing just a few yards away… as they had their heads blown off by shrapnel or snipers.

And of his former unit, the territorial battalions of the Devonshire Regiment? The majority did indeed ship out to Karachi, Basra, and Lahore, there to spend the duration of the war in arguably less dire straits, far from the mechanized killing fields of the Somme and Ypres.

Yes, Granddad did survive, none the worse for wear. But his is a story to remind you to be careful for what you wish….