[Today’s post is sponsored by Sergei Chernikov, PhD, of Apex, NC. As a fellow employee of state government, I know that the (not so subtle) similitude of our shared bureaucratic experiences will not escape him]

Native Americans were known by early explorers to use tobacco in a variety of ways, including to treat medical ailments. European doctors quickly picked up on this – recall that tobacco was an exotic product at the time – and began to prescribe the noxious weed to treat everything from headaches to cancer, hernias to emphysema, and abdominal cramps to typhoid and cholera (all without much or any supporting empirical evidence).

For reasons lost to history, and though it was likely in practice earlier, a Dr Richard Mead in London first suggested in writing in 1745 that administering tobacco per anum was an effective way to resuscitate near-drowning victims.

This is how it worked in theory: upon pulling an unconscious victim from the water, a rubber tube was to be inserted in the rectum. The tube was to be connected to a fumigator/ bellows which compressed air and forced smoke into the colon. Sometimes a more direct route to the lungs could be substituted by forcing smoke into the nose and mouth, but most physicians of the period felt that the rectal approach was more effective. The nicotine in the tobacco was thought to stimulate the heart to beat stronger and faster, thus encouraging respiration. The smoke was also thought to warm the victim and dry out the person’s insides, removing excessive moisture from those waterlogged and near death. 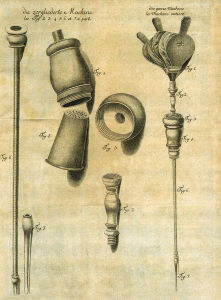 from a medical textbook of 1776

[sidebar: this method was not recommended for the geriatric population, as it was believed that tobacco per anum dessicated the humours, made the brain sooty, and only exacerbated dryness in old people who were dried up anyway – I’m not making this up]

One of the earliest documented references to employing this treatment for resuscitation comes to us from the year following Dr Mead’s publication. In 1746, a man in Amsterdam pulled his unconscious wife from a canal. The absence of bellows notwithstanding, a passing sailor suggested that emergency tobacco administration might revive her, at which point the husband took his pipe filled with burning tobacco, shoved the stem into his wife, and blew hard. As one can imagine, hot embers of tobacco being blown up her rectum had the intended effect and she was, indeed, revived.

In the later 18th century, it was not uncommon to see bellows hung alongside major waterways, such as the Thames – much as we have defibrillators in public venues today – in case someone was found in the water and could be ‘saved’ by a timely tobacco intervention. 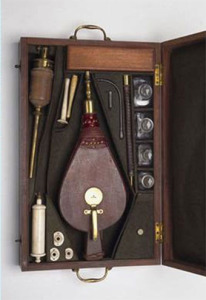 don’t attempt this at home

In 1811, an English medical writer noted that “[t]he powers of the tobacco enema are so remarkable, that they have [captured] the attention of practitioners in a remarkable manner; of the effects and the method of [administering] the smoke of tobacco per anum, much has been written”; he then provided a long list of (peer reviewed?) European publications on the subject.

Eventually, artificial respiration was recommended by some practitioners for near-drowning victims… but only if the tobacco method didn’t work first.

By the second quarter of the 19th century, though, as medical science progressed, the practice of blowing smoke up someone’s rear finally became a thing of the past.

Figuratively, however, the practice remains alive and well.