There’s a satisfying feeling in bringing something back from the dead.

Since I’m not a trauma surgeon, though, I don’t get many opportunities to do that in my professional life. So instead I turn to automobiles.

I’ve owned a Ford Model T for a number of years, but recently I ‘upgraded’ to a different T, albeit one that didn’t run, had to be towed, and needed work.

The car, a 1911 Torpedo Roadster, has most of its original factory features, including a Kingston 5-ball carburetor and a 6-rivet rear end assembly, neither of which were used by Ford after 1911. Additionally, Fords made in early 1911 were still employing leftover 1910 bodies, which can be identified by the presence of exposed (non-metal covered) wooden lower outer body panels and square transmission covers, both of which this car possesses.

Accompanying documents show that the Torpedo was purchased new by Mr X in Afton NY. Mr X last registered the car on 26 May 1930, and it apparently wasn’t driven from 1931 until 1980! The grandson of the original owner then sold the car to Mr Y after almost 70 years in the original family!

Mr Y did some restoration work on the car, but before long he died. The next owner, Mr Z, toured in it a few times, and then also passed. I obtained the car – as only the fourth owner in more than a century – from Mr Z’s estate, knowing that while it had been stored in a climate controlled environment, it had not been driven in more than two decades.

I dutifully registered the car in North Carolina, but ran across a license plate issue. In this state, while all registered cars need to have plates, owners don’t need to display modern plates on antique cars (merely keeping them accessible to produce if asked). An antique car owner can instead affix a plate from the year of the vehicle’s manufacture.

That sounds easy, except that North Carolina didn’t issue plates until 1913. 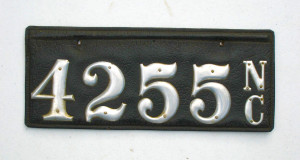 So what did they use in 1911? Homemade leather plates with attached metal license numbers. And I actually found a fellow on the West Coast who custom fabricates such things in the 21st century!

Duly registered and licensed, leather plate in hand, the car was ready to go but still didn’t run, sitting forlornly in my garage until yesterday. I was relieved that the Torpedo had been saved for posterity, especially as with all such old cars, for years it had run the risk of scrapping as an inoperable hulk just taking up space. Posterity or not, what I didn’t know was how much effort would be necessary to get it running again.

Enter my good friend Brian. A accomplished car collector and mechanical wizard in his own right, he sacrificed his day to teach me some basics and get the car back to life. After having seen it, he felt it wasn’t too far ‘gone.’ I wasn’t so sure, but happily agreed to his kind offer.

Towed to Brian’s garage, the detailed inspection began. The radiator didn’t appear to have any leaks, and while it contained antifreeze, there wasn’t any discernible rust. The 103 year old carburetor appeared clean enough. The engine had decent compression when hand-cranked (starters weren’t used in Fords in 1911). The tires, probably from Mr Z’s tenure, held air; the fan belt, from the same era, appeared intact. And the tank only had trace gasoline inside, meaning that we probably didn’t have to perform a major cleaning of the fuel line.

Brian and I drained old sludgy oil from the engine, along with the radiator and gas tank contents, once the car was up on the lift. He showed me where the chassis needed lubrication, and also where two stopcocks under the transmission housing needed fixing (which is extremely important on a T, since there is no dashboard oil gauge, and if one starts hemorrhaging oil due to a major underside leak while the car is operational, it can do serious damage by the time the problem is realized). We then addressed a mysterious wiring problem uncovered in the wooden coil box.

After hours of work, new fluids, and a battery, attempts to crank-start the car were still unsuccessful. We then took it outside and tried to start it by towing with an ATV. The engine sputtered and backfired, sounding pretty sick indeed.

Back in the garage, we removed bolts from the head and exposed the aluminum pistons and the valves, leaving the engine block in situ. I compared this to an autopsy, the analogy seeming to tickle my colleague. 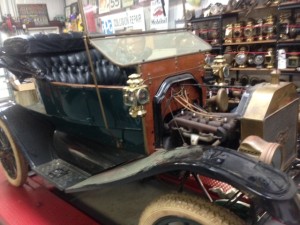 To my eye, the now-exposed valves didn’t look particularly bad. Brian, however, said they were not ‘seating’ correctly, even if only by a millimeter or so, causing the engine to sound so sick. The valves therefore needed to be grinded and cleaned with abrasives. Each of the eight cast iron valves was accordingly done, but afterward, except for appearing a bit shinier, they didn’t look much differently than when we had begun. Brian, however, was confident that this would make the difference. 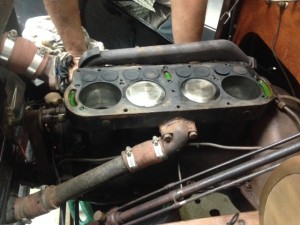 And as we were about to reassemble the engine, we installed a new head gasket – essentially two sheets of very thin copper sandwiching a layer of asbestos – as the old one was showing signs of cracking and leakage.

By now we had been doing car work for more than 10 hours. It was getting dark outside. Every muscle in my body was aching from all day spent using elbow grease and also climbing under the chassis to fetch tools and parts we dropped (more than once in the disgusting old oil collection pan). I was filthy dirty, and had not eaten since late morning.

But it was time to attempt to start the Torpedo again. I still had my doubts. Brian laughed at my lack of faith.

The engine compression – thanks to the valve job – was now very high, and to me made the effort to turn the crank Herculean.

Brian is far more experience at this. After several of my futile attempts, he stepped to the front of the car, gave two powerful rotations, and the engine roared. After quickly adjusting the spark advance and carburetor, the idle changed to the purr of a well-fed kitten despite its years of suspended animation! 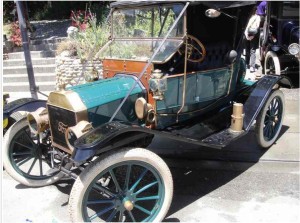 Though only old metal machinery, it were as if the car had indeed come back to life last night!