A common misperception is that Robert Burns’ Auld Lang Syne has been part and parcel of New Years’ celebrations since long before his death in 1796.

Sorry to deflate you, but Burns didn’t compose it, and its only been a ‘tradition’ since the 1930s.

You see, the euphony actually has nothing do to with a new year. Roughly translated from the Gaelic as “Times Gone By,” what we know as Auld Lang Syne is simply a soulful lament remembering old friends. Burns did write down the words in 1788 for the musical museum and archives in Edinburgh, but he stated at the time that, “this… song, a song of the olden times… which has never been in print nor even in manuscript until I took it down from an old man’s singing, is [of value] enough to recommend [it].” We’re not even certain of the original tune carried by the old man; Burns suggested that the lyrics he captured would go well with the truly ancient Scottish strain, Can Ye Labour Lea, the one we recognize as Auld Lang Syne today. 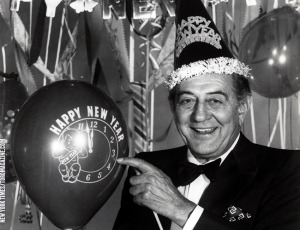 The not-so-ancient New Years’ Auld Lang Syne tradition actually started with Guy Lombardo and his Royal Canadian Band. They played the Roosevelt Hotel in NYC on 31 December 1929, a gig which was radio-broadcast by both CBS and NBC. As midnight approached, Lombardo decided to play Can Ye Labour Lea at the stroke of 12:00, though no words accompanied his performance. It was a haunting and beautiful melody with which Lombardo was familiar from many Scottish immigrants in Ontario, again without any specific New Years’ connotations.

Lombardo – a rock star of his age, known as “Mr New Year’s Eve” at the time but little know by younger generations today – was indeed influential. His rendition was a huge hit. The Royal Canadians played Can Ye Labour Lea, then referenced as Old Lang Syne, every New Year’s at midnight from 1930 until Lombardo’s death in 1977.

By then it had become a staple, outliving its two famous patrons, and remains so to this day.