I read recently that Sigmund Freud’s psychoanalysis couch – the very same one that he brought with him from Vienna to London when escaping the Nazis and on which all of his seminal patients spilled their guts – was in urgent need of restoration. This high-Victorian fainting divan resides, covered with its accompanying antique Persian carpet since the late 19th century, in Sigmund’s untouched study in the erstwhile Freud homestead and museum north of the capital. It looks like you could just walk over and recline on it.

Which is exactly what I want to do.

And someone recently has, since the museum brochure describes the couch as “surprisingly comfortable.” 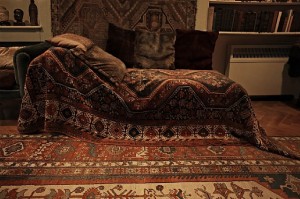 So I wrote to the Freud museum and said that, as a forensic psychiatrist and admirer of the great thinker, I’d foot the bill for the couch’s restoration if they’d let me repose on it and get a few photos in the process the next time I’m in London.

Earlier this week I rec’d their reply:

29 October 2013
Dear Doctor: Thank you for your email. I’m afraid we do not let anyone sit on the couch. Although we have had many requests in the past – and will probably receive many more – we have a strict policy at the museum. The couch restoration took place in September and happily it is now in a much more stable state. A team of specialists were able to repair damage to the textiles and restore the physical stability of the couch; however it is still very much a museum piece and as such cannot be handled as could a normal piece of furniture. I hope this response is not too disappointing. All the best, [signature], assistant curator.

Restoration completed?!? Someone beat me to it!

Scratch this one off the bucket list… moving onward to being a guest voice actor on The Simpsons.