The winter months are a time in which many pay homage to creation and regeneration. In November, Hindus celebrate Diwali, the festival of the return of Lord Rama from exile. The Muslim holiday of Eid al-Adha celebrates, in part, the miraculous discovery of the Zamzam Well. Bodhi is recognized in December as the day on which the Buddha finally achieved perfect enlightenment. In the Northern Hemisphere, the winter solstice – called Dongshi amongst the Chinese, Yalda amongst the Persians, Modraniht amongst the Anglo-Saxon pagans, Saturnalia amongst the ancient Romans, and Soyal in Hopi and Navajo lands – is the point at which the days incrementally grow longer. Christians celebrate the birth of their savior in late December. On Hanukkah, the Jews regained control of Jerusalem and rededicated the Temple.

In all of these traditions, a cycle begins anew.

In that spirit, I present to you the story of a resurrection of a more temporal nature, albeit one impossible to have predicted, and most unusual. But to fully appreciate this tale, we need first to turn back the clock a bit… say, seven centuries.

Medieval improvements in the crossbow represented in that era a military advance arguably as important as that of firearms in the 17th century or airplanes in the 20th century. It was in many respects a game-changer. While weapons similar to crossbows, or arbalests as they were then called, existed far into antiquity, the classical medieval crossbow gained wider use, especially amongst troops of minimal training and discipline – think conscripts. The most common form of the weapon consisted of a horizontal limb, the lathe, as well as a push-lever and a ratcheted drawing mechanism, the crannequin, all mounted on a sturdy stock – wood and whalebone at first, and iron later. This contraption was designed to fire metal projectiles, called bolts or quarrels, with much greater velocity and kinetic energy than could be produced by longbows powered only by an archer’s upper extremities. The earliest arbalests were comparatively light and could be ratcheted by hand while the stock was braced against the body. Later variants were much heavier and required that the stock be placed on the ground with the bowman’s feet holding it down as both arms and the back were used to mechanically retract the string and hook it over the nut in preparation for shooting.

But it wasn’t just the increased energy behind the crossbow’s projectile that was so significant. The training of those skilled in the use of longbows took years, and constant practice and physical training was required. The crossbow could be mastered by draftees with a mere week’s instruction. As they were simple to operate, and deadly, suddenly mounted and armored troops became far more vulnerable. By the 12th century, arbalests were in wide use throughout Europe. Seeing the potential decimation of ancient noble families (read: supporters), Pope Innocent II at the Second Lateran Council in April 1139 forbade the use of such weaponry against the faithful:

“Artem autem illam mortiferam et Deo odibilem ballistoriorum et sagittariorum, adversus christianos et catholicos de cetero sub anathemate prohibemus” (we prohibit under anathema that murderous art of crossbowmen and archers, which is hated by God, to be employed against Catholics from now on)

In 1215, the Magna Carta also made mention of crossbows and the need to rid the realm of them:

These proscriptions were widely ignored.

Saint Severin was the third Bishop of Cologne, living there in the late 4th century. His earthly dust is today preserved in a golden reliquary in the choir of the city’s church that bears his name. In his honor, too, one of the gates of Cologne’s fortified city wall was named for him. The Severinstorburg, or Severin’s Gate, was first documented as a portal and defensive bulwark in the early 13th century. It was used not only to protect the city, but also as the formal entrance for the wealthy and powerful approaching from the south. Today it remains one of the only extant portions of the wall.

Cologne was a major economic and political center in medieval times. It was a vital harbor and transportation hub on the Rhine, and it also served as an important center of religious pilgrimage. Cologne and its environs, however, were in a near-constant state of internecine warfare during the 13th through 15th centuries. A fortified city wall was therefore very much needed.

The now-nameless individual in question might have been a peasant conscript or a nobleman. He might have been on foot, or mounted. He might not even have been a combatant – perhaps he was a priest? But what we do know is that he was present during one of the many battles at Severinstorburg, and he was struck by a crossbow bolt in his left anterior thigh. The deadly iron projectile hit the limb a few inches above the knee. Because we don’t know from how far away the weapon was shot – crossbows of this type were often rampart weapons, raining death upon combatants below – we don’t know the exact force at impact. However, a typical crossbow of the era could produce up to 1200lbs of draw-weight, far greater than any longbow of the Middle Ages, and would have yielded significant damage upon striking.

One can tell from the location of the subsequent skeletal injury that the bolt pierced the vastus medialis, rectus femoris, or vastus lateralis – all major muscles – and could have lacerated the quadriceps bursa, quadriceps femoris, and synovial capsule on entry as well. Regardless, the bolt failed to exit at the linea aspera of the posterior aspect, instead remaining lodged firmly in the bone’s marrow. The bolt probably missed the femoral nerve and artery, though it is near-certain that large branches of the lateral femoral circumflex artery, and possibly the femoral vein, were severed by the hit, causing profuse bleeding.

One also suspects that our subject died at the same time and place that he sustained the crossbow injury, though we don’t know if that wound was the fatal insult, or merely one of many. This is because, had our subject been moved from the field of battle and succumbed later, it seems highly improbable that he would have been carted back to the site of his mortal injury for interment.

Instead, our subject was not apparently carried from the field, but instead wound up in the city moat, at the site of battle.

Not a particularly good way to go.

He became embedded in the muck at the bottom of the moat. Or at least did his injured limb. And there it remained. For a very long time.

In the early 1920s, the canal around what was left of the city wall of Cologne was drained in preparation for construction. In the course of dredging at Severinstorburg was found a human femur with a crossbow bolt embedded in it. The relic was obtained by a private collector and, almost a century later, displayed in the exhibit, “Aufruhr 1225: Das Mittelalter an Rhein und Ruhr” at the Archaeological Museum of Mainz in 2010. The curator’s catalog lists the relic thusly:

“#124. Human Femur with Hole from Crossbow Projectile. 13th century. Severinstoburg. 42.5cm length. Inv. No. A67. The iron tip has frontally penetrated halfway into the bone above the knee. Surrounding the entry wound, tiered comminuted fractures are visible, which resulted from penetration of the blunt tip into the bone surface. The projectile has a solid forged-iron rhomboidal head with a short shaft. Crossbow projectiles were in the Middle Ages feared long-range weapons that could pierce through ones armor, and the massive spikes often caused lethal damage. One of the numerous combat operations in connection with the feuds of the 13th century in Cologne produced this serious injury.” 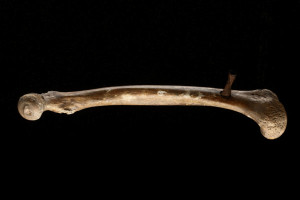 Postscript: my medical training has rendered me a person of rational thought, and I do not consider myself superstitious in the least. However, after negotiating with the museum during its deaccession process and bringing the femur-and-bolt back to my cabinet of medical curiosities, I washed my denim jeans… and a jagged rip developed in exactly the same location as would have been the entry wound 750 years ago. These were new jeans, and had not been abused doing yard work or heavy lifting. And the rest of the denim was undamaged. The tear spontaneously developed while all of the other clothes in the same wash load were spared. Same leg, same spot.

Laugh if you must, but even for a man of science, this is a bit too coincidental.

One thought on “A Medieval Quarrel”