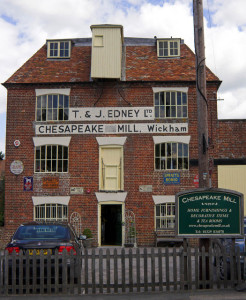 (today’s post is sponsored by renowned scholar and antiquarian Robert White, of Bristol TN; as this post involves lemon forks, Bob, I thought of you immediately)

This weekend past, I purchased the latest release from author Erik Larson. Entitled Dead Wake, it is the story of the final days of Lusitania, which was torpedoed and sent to the bottom one hundred years ago off the southern coast of Ireland. Larson is one of the very few non-fiction writers whose works I purchase in hardcover the minute they’re released, instead of waiting for the paperback version the following year. He can tell a story, and he hasn’t suffered a misfire yet. This newest work is no different, weaving the major players and events leading up to the Lusitania disaster with stories of unheralded and ordinary victims caught in global events over which they had no control.

While I’m not of the age that I can personally remember the biggest names in trans-Atlantic voyaging – Empress of Britain, United States, Normandie, the two Queens – as I have been reading Larson’s work, I am recalling my own experience with an elegant New York to Europe round trip before commercial jets sealed ocean liners’ fates.

And luckily, my passage didn’t turn out as tragically as did that of Lusitania – at least not for me, although it could have, had my conspirator and I been caught.

By the late 1950s, aircraft passenger travel had yet to exert a noticeable effect on the numbers of those in ocean transit between the United States and Europe. The Italian Line, therefore, ordered two new ships, the Michelangelo and Raffaello, amongst the very last vessels built primarily for liner service across the North Atlantic. And the company flouted the old sailors’ convention that naming ships after men is bad luck, later proven to be true. 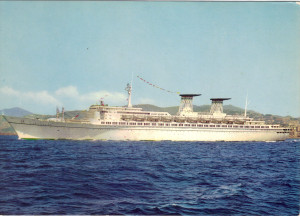 Architect Gio Ponti wrote that an Italian ship is a movable piece of Italy, and it must represent the highest and most prestigious aspects of the homeland’s culture. In those showcase times, and as Rome partially subsidized the Line, the foyers, staircases, ballrooms, dining areas, corridors, and chapels were filled with works by Italy’s most important artists of that period, including Capogrossi, Ridolfi, Turcato, Fiume, Mascherini, and Luzzati. No Holiday Inn lobby schlock here.]

My father booked passage for the family from New York to Italy, and back, on the 46,000 ton Raffaello in the early 1970s. The entire trip was to take almost a month with stops.

Raffaello had 30 lounges, a two-level cinema, three night clubs, eighteen elevators, a garage with room for fifty automobiles, closed circuit TV, six pools, and an operating suite – not to mention that the fusion art deco-futuristic décor was entirely fireproof, a marvel for its day. And her two unique trellis-style funnels were instantly recognizable, even to the present.

But what was an eleven year old to do, trapped in a elegant prison?

High tea was then still a big deal. Each day, after the lunch seatings had finished and the dishes cleared, the wait staff would start to set places and prepare the Darjeeling and scones. The afternoon salon was located on one of the upper decks, and there was a sweeping semi-circular staircase just outside its entrance. Over the landing of the staircase were large paintings of famous Roman mythological deities and events – they were beautifully executed in the style of the Old Masters, in carved and gilded frames, and inarguably of considerable value.

It didn’t take long for me to find a bored co-conspirator, a fellow pre-teen hellion named Roland from the American Midwest whose dentist father had brought his family on vacation (Roland, if you’re reading this, please contact me). As the waiters were scurrying about, preparing for tea, Roland and I would sneak between the tables and pocket as many of the pre-cut lemon wedges and creampuffs as possible without being seen – but these were not to eat. Instead, we learned that garnishes and confections stuck quite well to canvas when flung from a distance, lemon forks and serving spoons being excellent catapults. So Roland and I spent our lazy afternoons at sea dodging the wait staff, requisitioning foodstuffs, and sitting on the balcony overlooking the master staircase while taking potshots at the Ridolfis and Turcatos over the railings. Hitting Mars or Venus in particularly private, er, places was uproariously funny when in 6th grade, as long as the peels of laughter didn’t somehow draw the attention of the stern purser who might be patrolling the area at any moment.

That we weren’t caught by angry staff, throttled, and thrown in the brig remains a miracle.

But this taught me two valuable lessons for adult life.

First, that vasectomies are good and sadly underutilized.

Second, that should you have offspring, do not travel with them anywhere nice before they have reached their mid twenties at the earliest.

And of the Raffaello? Despite huge financial losses, the Italian Line operated its trans-Atlantic route until the mid 1970s, when Leonardo da Vinci, Michelangelo, and Raffaello were all withdrawn from service, and the company turned instead to container freight shipping. In 1976, Raffaello was sold to the Shah of Iran and used as a floating barracks near Bushehr. Heavily damaged during the Islamic Revolution and later in the Iran-Iraq war, rammed by a cargo ship and then struck by at least one torpedo, Raffaello partially sank in shallow waters of the Persian Gulf, and she is barely visible from the surface today.

So I suppose what Roland and I did to her wasn’t so bad in comparison. RIP.