Viagra By Mail!
Enhance Your Performance!
Only 99 Cents Per Tablet!

This is what most of us find in our spam baskets, usually written in pidgin English and from strange overseas ISPs. Viagra, as you probably know, is one of Pfizer’s all-time blockbusters, and remains under (very expensive) patent protection in the United States until 2019. Although its sales peaked in 2008, four years later it still earned the mother ship over $2B in global sales. Depending on the insurance/ copays/ deductibles my male readers might possess, a tablet of 50mg can cost upwards of $32 each.

[sidebar, overheard at one pharmacy window: “$32?!? No thanks. The missus sent me. Not worth it”]

So the above e-solicitation is obviously bogus, right? 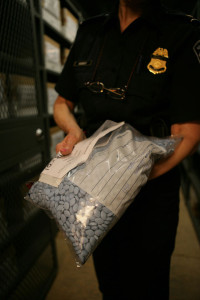 Viagra, patented first in the U.K. in 1996, came on the U.S. market two years later. Its active ingredient, sildenafil citrate, was originally investigated as an anti-hypertensive and treatment for angina pectoris. It acts by inhibiting cGMP-specific phosphodiesterase type 5, an enzyme that promotes degradation of cGMP… pretty boring stuff, unless you’re a biochemist. But it was only during clinical trials that its other, far more lucrative and now famous, physiologic effect was discovered. Now ubiquitous in late night comedians’ monologue punchlines, aging men (think Hugh Hefner, Bob Dole, Pelé) sing its praises, and a robust grey market has developed. Not a few marriages have been saved, and probably more destroyed, by its easy (albeit expensive) availability. It is said to be the most counterfeited drug anywhere. In short, Viagra’s pop culture notoriety has done for American – nay, world – sexuality in the 21st century what The Pill did for the Sexual Revolution back in the 1960s.

But it’s so damned pricey!

[sidebar: now working with the Veterans’ Administration, I’ve noticed that a majority of my male patients are prescribed Viagra by their primary care docs. However, the VA puts a strict limit on how many Vitamin Vs a patient can receive, likely because of cost. In case you’re wondering, Washington allows twelve tablets per 90 days. I’ve had more than one vet come to my office fuming, saying something to the effect of, “I served honorably for [x] years in [insert Third World hellhole]. And now Uncle Sam tells me that I can only get lucky* once a week?!?”]

[*“get lucky” is not the actual phrase used]

I have written before about off-label prescribing, the (perfectly legal and widely practiced) mechanism by which drugs approved for one indication can be used for whatever the prescriber wants, once the Rx is on the market. In a related vein, many medications were first envisioned for one role but quickly segued to other uses as clinical findings and needs dictated.

Monoamine Oxidase Inhibitors were being applied to treat TB before their antidepressant effects were realized.

Minoxidil was used for hypertension and then was found to grow hair on bald scalps.

The moiety Bupropion has been marketed as both Wellbutrin (for depression) and Zyban (smoking cessation).

Fluoxetine is best known when prescribed as Prozac, another antidepressant, although it also is the active ingredient in Sarafem, for monthly pre-menstrual symptoms.

[sidebar: I remember a time when Wellbutrin and Prozac were on formulary, while Zyban and Sarafem were not. Easy to get around that, however… just prescribe the formulary agent for the non-formulary indication and everyone is happy except the accountants]

In short, if it’s FDA approved, on the market, and you have a medical license and can prescribe, go for it!

Why this is germane: Viagra for male erectile dysfunction loses its U.S. patent protection in 2019. But sildenafil, its active ingredient, has already been available to internists and pulmonologists as a generic for the treatment of pulmonary arterial hypertension since 2012. And as a generic, sildenafil’s cost has plummeted, now running about $1 per 20mg tablet (or $3 for three of them, roughly approximating the dose of sildenafil in a costly 50mg Viagra)

To make matters even more interesting, local pharmacies can usually order generic sildenafil with little effort, and will often mail these meds to one’s home if the doctor calls in a prescription and you provide a credit card number. These are not fly-by-night foreign mail order pharmacies. These are (licensed) pharmacies here in the US of A providing an accepted pharmaceutical for a recognized medical use – the treatment of pulmonary arterial hypertension.

Although seen in other illnesses as a related finding (e.g., pulmonary embolus, scleroderma, lupus), at a frequency of only 3 per million, idiopathic pulmonary arterial hypertension is a far less common condition than, say, middle aged erectile dysfunction.

So, with a wink from your doctor and pharmacist, what one does with the cheap sildenafil when it arrives with your electric bill and copy of TIME magazine is entirely up to you.

I have written previously about the placebo effect, especially as it pertains to psychotropics in general, and soporifics (sleeping pills) in particular.

The answer is ‘yes,’ and it’s called the nocebo effect.

The New York Times wrote in August 2012 of a patient in an antidepressant drug trial who was, unbeknownst to her, in the placebo arm of the study. She overdosed on almost fifty of the sugar pills in a suicide attempt. Even though the tablets were chemically harmless, the participant’s blood pressure is said to have dropped precipitously following her ingestion (she lived).

It would seem that the nocebo effect is real and, potentially, problematic. To make matters worse, nocebos – even though they are solely comprised of thoughts resident in our own minds – can be contagious.

An example of a contagious nocebo can be found with ‘wind turbine syndrome.’ That’s not actually a medically-recognized condition. Many in the public, however, believe that the large electricity-producing windmills emit a barely audible buzzing noise, one which can result in nausea, dizziness, fatigue, tinnitus (ringing in the ears), and headaches.

Scientists have postulated, however, that when multiple individuals near wind turbines complain of these symptoms, it’s a result of a ‘communicated condition,’ one that, like a mass hysteria, spreads from mind to mind. People can literally worry themselves sick.

Simon Chapman, PhD, a professor of public health in Australia, is quoted in The Guardian as stating, “if wind farms were intrinsically unhealthy or dangerous in some way, we would expect to see complaints applying to all of them, but in fact there is a large number where there have been no complaints at all.”

Chapman cited a study out of New Zealand that exposed 60 healthy volunteers to both real and fake low-frequency noises, the former similar to what is produced by wind turbines and is sometimes known as infrasound. Half of the volunteers were shown television documentaries about the purported health problems associated with wind turbines, while the other half were not. Then both groups were played random noises: some infrasound, some not, and some a mixture. And those who had seen the videos about the allegedly adverse effects reported higher levels of subjective symptoms regardless of the type of noise to which they were exposed.

The wind turbines may be harmless, but breathless media coverage of them isn’t. In the words of one perplexed scientist, news stories about wind turbine syndrome aren’t reporting on the disease… they’re actually creating and spreading it!