Are you having trouble sleeping?

Are you experiencing fluid retention?

Do you have a tendency to “cause trouble”?

If so, based on medical texts from the late 19thc, you are obviously a hysteric. As many as 75% of middle class women in America were then thought to suffer this ailment. And at the time, the standard of care – for those women who couldn’t afford to travel to Europe and lie on Freud’s couch – was a “pelvic massage” resulting in therapeutic “hysterical paroxysms.”

In other words, the patient needed a medical sex surrogate to bring her to climax (weekly was the suggested frequency) and all would be restored to normalcy.

Today, this strangely sexless office sex would almost certainly result in a lawsuit and loss of licensure. Not so in 1900.

Apparently most doctors at the time found the manipulation to be tedious, as literature of the day reported with seeming straight face that it often took hours to accomplish. The good doctor needed something to assist.

One must wonder: did females see the clinician unwrapping said apparatus and feel even fleeting anticipation, or just the kind of dull disinterest one would experience while watching a mechanic change the car’s oil?

The first (smaller) battery powered unit followed from the fertile mind of British physician Joseph Granville a mere eleven years later. Manufactured by the Weiss Company, it was lighter, easier to move, and less expensive than the Taylor machines.

Then homes started to be wired for electricity. By 1900, there were more than a dozen companies in the U.S. and U.K. that were churning out mothers’ little (plug-in) helpers. The Age of Electricity saw the advent of the electric sewing machine, the electric fan, the electric tea kettle, the electric toaster… and these contraptions (which, I might add, predate the electric vacuum cleaner). To our modern eyes, such devices hardly seem alluring. The giant noisy motors. The thick cloth that covered the cords to prevent sparks from flying. The need to add oil occasionally – that last feature yielding the ambience of a bedroom chainsaw.

Marketing was then expanded beyond medical journals. Ads began to appear in Modern Woman and Woman’s Home Companion. These ads remain legendary, promoting such claims as “relieves all suffering,” “wonderfully refreshing,” and “curative of many diseases.” Gushed one, “it can be used by yourself in the privacy of dressing room or boudoir, and will furnish every woman with the essence of perpetual youth!”

And they were economical too. With doctors charging $2 per, er, treatment at the turn of the century, the $5.95 cost of hand-held plug-ins meant that a machine paid for itself after a mere three self-help sessions.

Throughout the 1910s and ’20s, print ads flourished, providing hysterics around the country with relief, courtesy of USPS mail order. Hamilton Beach made such equipment. So did Sears Roebuck, their 1918 catalog vaguely mentioning that the devices were “very useful and satisfactory for home service,” hoping you got the idea and no further explanation was necessary. 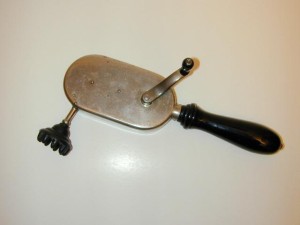 There also existed, briefly, pneumatic and hand-cranked models, Macaura’s Pulsocon from the 1890s and the Vibro-Life from 1908 being examples of the latter. Given the relatively recent cultural vogue of total depilation, one cannot help but ponder the cringe-worthy outcomes of applying to one’s self, pre-Brazilian waxes, a metal instrument that twisted not unlike a baker’s mixer.

Even though it was a poorly kept secret – wink wink – once vibrators began to appear in naughty pictures, they were driven almost instantly from the pages of ‘respectable’ publications. They reappeared only during the Sexual Revolution of the ‘60s, and then purely and unabashedly as erotica, where they have remained to this day, their stiff-collared Victorian roots notwithstanding.